Globally, the divorce rate has increased upto 251.8 % since 1960. This means that divorce has become more common than before.

But is it easy?

Divorce is the severing of a lifelong commitment—an intimate relationship. Presumed to last a lifetime, when a marriage fails could exact a toll on the involved parties.

Read on to learn about the emotional roller coaster of divorce and understand why divorce seems so final and frustrating.

Divorce in its aspect of finality and trauma is often likened to death. For a person undergoing divorce, it may seem like the end.

The relentless vilification or the muffled gossips by society while reeling from the trauma of the separation is a major reason.

While death is also a traumatic event, it is followed by burial and rituals which allow the bereaved to come to terms with it. This type of healthy-grieving is not available to a divorcee, who has virtually no support during their grieving.

This makes divorce seem like death without a burial. To soften the blow of divorce, one can look for ways to make the split as smooth as possible.

Emotional Stages of Divorce for a Woman

Ironically, the fairer sex do not experience fairness in society with the way they are treated when dealing with social issues such as widowhood or reeling from a divorce.

With divorce, a woman typically goes through a grieving process that resembles the following 5 stages: 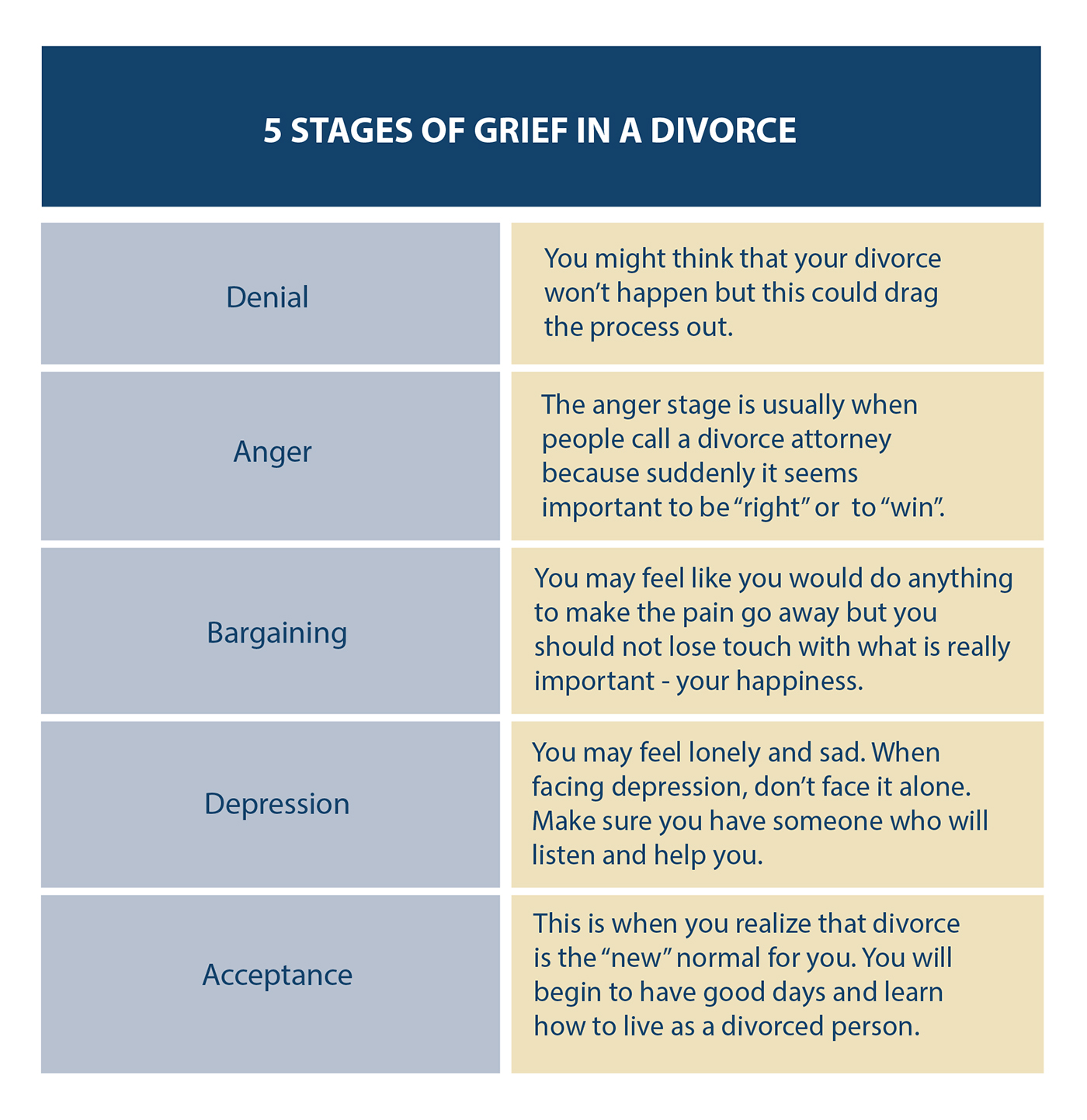 The first stage of anxiety or denial depends on the circumstances of the divorce. When reeling from a disastrous marriage, the anxiety of the future could be a major concern.

Feeling uncertain and unsafe may be the first stage. While a relatively long and stable marriage turning sour could make women linger in denial.

The next stage of anger could stem from a form of guilt especially when they are the initiator. It could take the form of self-blame or regret.

Sometimes women tend to channel their anger on their children in the absence of other opportunities to vent their dissatisfaction.

Some women cross over to the bargaining phase when they feel they could done something to save their marriage. This could be the effect of time, space or any new development during the divorce proceedings.

When all ways of getting together fails, depression sets in. This could also be the effect of a nasty break-up. This is the phase where support and understanding of family and friends is crucial.

This would help them cross over to the acceptance stage where they finally see the light at the end and are happy to walk towards it.

Is It Better To Be Widowed or Divorced?

Comparing the experience of being widowed and being divorced has long been a point of debate that has also been controversial.

While being divorced is the consequence of a willful decision made by both parties, a widow did not choose her path. A widow is a victim of time and circumstances which are beyond her realm of control.

Since both the groups of women suffer a deplorable status in society, weighing them both on a scale and checking for the better option is a futile attempt. 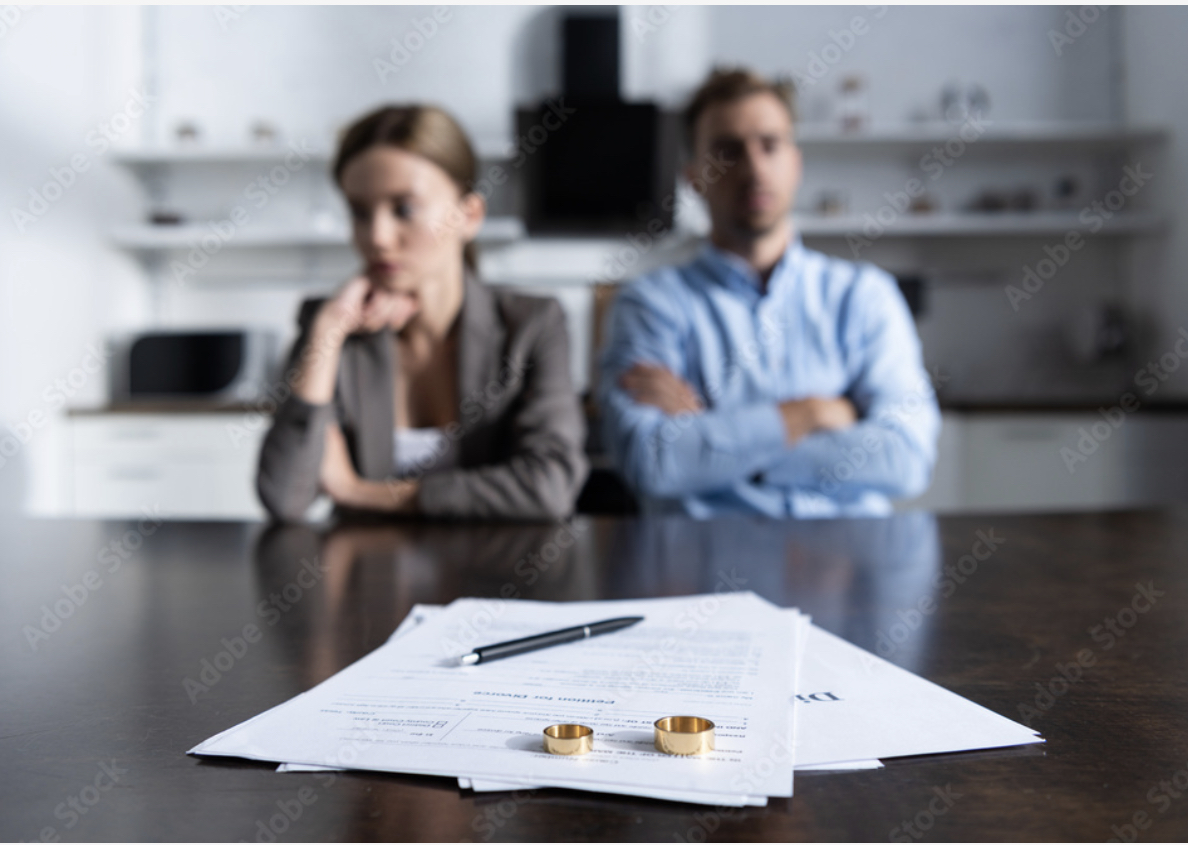 Emotional Stages Of Divorce For a Man

For a man, the emotional stages of divorce is slightly different even if they are the initiator.

The typical stages of emotions are:

For men, the initial stage of shock is peculiarly unique. It may be due to oblivion to their spouses’ discontentment or mere inconsideration. Unless they initiate the divorce, some men don’t even see it coming.

But all failed marriages have their signs of doom: relentless arguments, airing discontentment, mediators and even a trial separation.

For men, the initial stage could be confusing. Some resort to drinking, vilification of their ex-spouse or other forms of defense mechanisms.

This is followed by pangs of guilt, especially if the divorce was due to extramarital affairs. The feeling that they could have prevented the motion of events leads to the surfacing of anger.

Some men might resort to violence, threaten to take the kids away or even abuse the partner. But the stage of anger is mostly the crumbling of the ego.

The next stage of bargaining is when they believe that they can correct their life and turn it around. This may involve begging for forgiveness and another chance for redemption.

When that fails, they enter the stage of depression and loneliness. This could be the most traumatic for them as societal taboos have destroyed the ability of men to seek help and support.

Moving on from loneliness to acceptance could take a long time. But when they are finally ready, they may be able to put the past behind and make peace with it.

Various data show that the initiator of the divorce may regret the decision more. This may be due to guilt, the suffering caused due to the consequences of divorce or sometimes a changed perspective over time.

When divorces occur due to infidelity and extra-marital affairs, both parties seem to undergo regret. This regret grows from the belief that the relationship could have survived if not for the lapses of one partner and saved them both the trouble of divorce.

Since regret is a natural pit-stop in the grieving process, except for extremely toxic marriages, most partners experience it after divorce.

Stages Of Divorce For The Initiator

The emotional stages of the initiator of divorce is longer than their counterpart and could be more harrowing.

An initiator typically goes through five stages of emotional wave.

Usually the initiator is the first to identify and recognize the time and reason for the end of the marriage. This could stem from long term disappointment and exasperation.

FAQ Related To Why Does Divorce Feel Like Death:

Yes. Divorce could feel like death. It could be because of the permanence of the split—the tragic end of a presumed lifelong commitment.

Whether it is a mutual decision or one necessitated due to hostile circumstances, the feeling of finality could instigate feelings similar to the feelings of a bereaved one.

Since the tumultuous wave of emotions that one undergoes during the process resembles the grieving process of a widow/widower, divorce can seem to be aptly likened to death.

Which Is Harder Divorce or Death?

Divorce and Death share the impression of being final and irreversible. While death is the irreplaceable and permanent loss of a loved one, divorce is the death of marriage—the death of a lifelong bond.

There is an aspect where divorce trumps death. A bereaved one has almost always the support and love of friends and family. But not all divorcees have the same level of acceptance and assistance.

While a grieving widow/widower has the sympathy and comfort of loved ones, divorcees are often subject to ridicule, repudiation or even simply told to “move on”. The lack of understanding and moral support may make divorce seem to be harder than death itself.

How Long Does Grief From Divorce Last?

It is natural to grieve, and we all grieve in our own way. There is no universal timeline nor accurately delineated stages of grief.

The pain and suffering may end or endure. But as individuals, we need to allow ourselves the time and space to process the emotions.

The acute phase of grief may last for a few weeks. This may be followed by anger and residual contempt. Self-blame and regret could also surface. All these though seem different are a part of the grieving process.

This could take months or even years before you feel like yourself and learn to live with it. You only need to know this is normal and when the fog disappears, you will see the light at the end of the tunnel.

Does The Pain Of Divorce Ever End?

Although, it may seem like the excruciating pain and the harrowing experience may never end, it is not true. Though some people move on after some time, for others, it may take longer than the time of marriage to get over it.

Once finalized, the divorce does not simply go away. The residual anger, resentment, disappointment, uncertainty and regret could prolong the pain.

Allow yourself the freedom and space to go through the grieving period. Despite the nature of the separation, the reason, and countless other factors, divorce is ultimately a uniquely personal experience.

Everyone needs support during the time. Talk to a therapist about your feelings. Getting support from family and friends may help immensely.

Though it may seem as there is no light at the end of the tunnel at the moment, it is there and you will find it.