Can you be a priest after getting a divorce? The answer is both yes and no. Before we go into a detailed explanation, here’s a summary of the answer.

First, the concept of divorce does not exist in Roman Catholic Marriages. Have a look at this verse from 1 Corinthians 7:10-11:

“To the married I give this charge (not I, but the Lord): the wife should not separate from her husband (but if she does, she should remain unmarried or else be reconciled to her husband), and the husband should not divorce his wife.”

So in a sense, if you have annulled your marriage, you were never married at all. In that case, you can go ahead and be an Ordained Priest.

Can you become a priest if you have a child?

For priests in the Roman Catholic tradition, being celibate is the norm. It is also codified in canon law for the Western rites. But there are certain exceptions to the rule that is justifiable.

If someone converts from the Anglican church to the Roman Catholic Church and already has children, they can still become priests. In many cases, laws that govern particular churches can allow this to happen.

Can a divorced man become a monk?

Yes, it is possible for a divorced man to be a monk. It also depends on which monastic order you choose. From the Benedictines to the Paulines to the Celestines – each has different rules regarding indoctrination to monkhood.

But in almost all cases, you cannot remarry after becoming a monk. Doing so will invalidate your monkhood. The same goes for any type of carnal relationship.

Monks take a vow of celibacy that they have to rigorously follow. The oath of celibacy is a very important thing for a monk, and violating it is seen as betraying the trust of God.

Can a divorced man become a pastor?

While the words pastor and priest are used synonymously in general usage, there is a difference between the two. The word pastor is used for Protestant and various non-denominational churches.

As such, there are slight differences in rules about who can become a pastor. But in many cases, the rules are more or less the same.

In many Protestant churches, it is possible to be a pastor even if you are a divorced man. Since rules in other non-denominational churches vary greatly, there are no fixed rules on who can become a pastor.

While some sects have ordained women as pastors, others haven’t. It is possible that some Protestant churches deny divorced men from becoming pastors.

But considering all the other prohibitions and rules, it is relatively easy for a divorced man to become a pastor.

How to become a priest – how to apply

There are numerous stages that you have to go through to become a priest.

A seminary will grant you a degree, such as a Master of Divinity. But it’s not enough to get a degree.

You must excel in the seminary to show that you truly want to be a priest. If you graduate from the seminary with good grades, you are on your way to becoming a priest.

After you have finished seminary, get in touch with your Bishop to know about getting ordained to the ministry. You will have to serve as a deacon for at least 6 months before you can apply to be a priest.

Once you are ordained as a deacon, it is often a matter of time before you are a priest.

It’s important to note that this is just a rough blueprint of how you can become a priest. Specific rules and steps depend on the rules of a specific parish or church.

On top of that, you would often need to prepare yourself mentally before you can enter the priesthood. If senior ministers deem you unfit, you may be asked to leave the seminary.

Becoming a priest after annulment – is it possible? 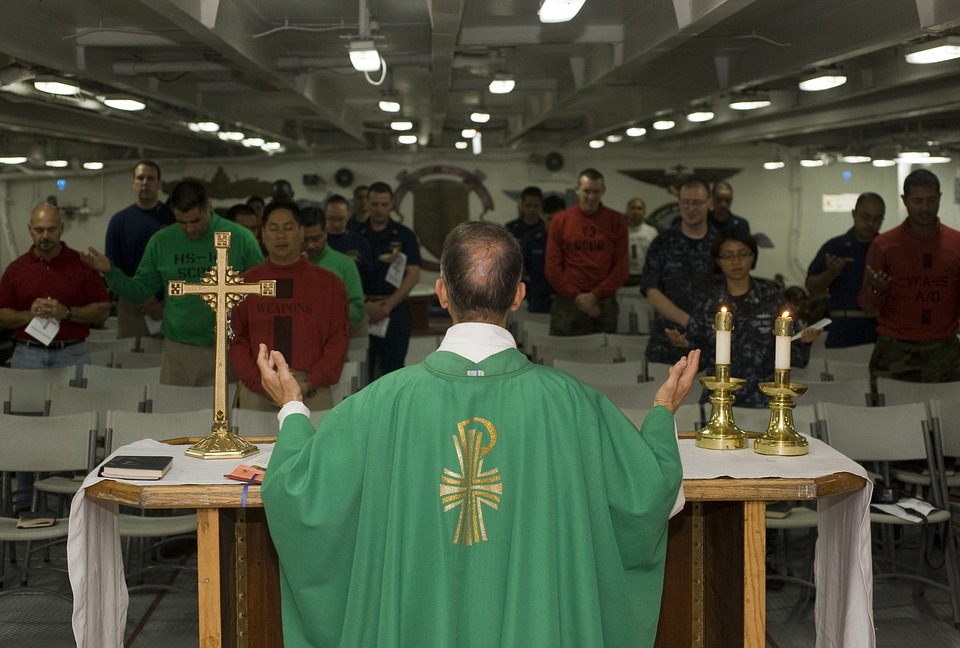 Yes, it is possible to be a priest after an annulment. However, it is not possible to remarry once you have been ordained as a priest.

In the Roman Catholic Tradition, the concept of divorce is non-existent. Instead, married couples have to go through marriage annulment before they can separate.

In essence, a marriage annulment dismisses and invalidates marriage between a man and a woman. As a result, the church does not see it as a divorce or separation.

Instead, the marriage is seen as something that had never happened in the first place. That makes it much easier to become a priest after an annulment.

In some cases, divorced men have to first annul their marriage if they want to be a priest. The legal documents of divorce do not hold much value to the church.

But marriage annulment is a simple way for divorced men to become priests.

Can a widowed deacon become a priest?

Yes, it is possible for a widowed deacon to be a priest. But the final decision often lies in the hands of the Bishop. If a man had a wife while being inducted as a deacon, it should be permissible for him to be a priest after his wife passes away.

Here again, it’s important to be learned and disciplined as a deacon. If you are diligent with your duties and routinely perform all activities that are expected from you, becoming a priest will not be difficult.

If a widower wants to be a priest, there are several ways to pave a path for it.

Do I need an annulment to become catholic?

It’s not enough to have a legal divorce only, you also need to have your marriage annulment done by a Catholic priest or deacon.

Getting an annulment is a simple process in the Catholic Church. Annulment is a formal process that delegitimizes a marriage in front of the church.

From there, the church considers the marriage to never have happened at all.

FAQ relating to becoming a priest and divorce status

In the following section, we will answer some of the most commonly asked questions about marriages, divorces, becoming a priest, and more. But before that, let us tell you that if you are seeking answers, looking for them is the first step.

The fact that you have a desire to be a priest shows how committed you are to God, yourself, and your faith.

While we strive to give the best possible answers to your questions, there are some factors you need to take into account. First, church laws vary significantly.

Christianity does not belong to one race or nationality or culture. There are Christians in every continent of the world, and they live quite differently from each other.

Geographical, historical, cultural, and social factors play a huge role in how churches determine their laws. Can I become a Catholic if I am divorced?

Yes, you can become Catholic if you are divorced. But if you are/were married, you will have to have your previous marriage annulled by a Catholic deacon or priest. Once you do that, you can freely become a Catholic.

Can you be married and then become a priest?

It depends on which church you go to and which denomination of Christianity you follow. But in Roman Catholic Churches, celibacy is usually a requirement for priests.

That disqualifies people who are or once were married. If you have your marriage annulled, the church may take your plea into consideration.

Can a divorced man become a deacon in the Catholic Church?

Here again, you have to refer to the specific laws of your church. If you are divorced and also had your marriage annulled, there’s a high chance you’ll be permitted to be a deacon.

Can a divorced man become an Orthodox priest?

Yes, a divorced man can become an Orthodox priest provided they have their marriage annulled by the church. But once they enter the priesthood, they have to take a vow of lifetime celibacy.

That means you can never remarry once you are a priest.

Can A Divorced Man Become A Catholic Priest?

Can a divorced man become a Catholic priest? – Quora